Laurence has been a lifelong Henley resident with only brief spells of absence for study. He grew up on Greys Hill followed by Greys Road whilst attending Valley Road school where he was a keen rugby player.

In his later years at Valley Road, Laurence sculled for Upper Thames and this became his passion alongside his academic studies. He studied briefly at Gillots school before being offered a scholarship to Pangbourne College.

Laurence rowed at Henley Royal Regatta over three years and his highlight was reaching the semi-finals of the Princes Elizabeth Cup.

Throughout his education Laurence worked locally. First at Hobbs Boatyard from the age of 13, where he worked during summer holidays until the lure of bar work took him to Loch Fyne at 17. Laurence moved to working at Franco Belge in his gap year following A-Levels.

Following his five year Masters Degree in Chiropractic Laurence had two great job offers on the table, Canary Wharf or Back In Line on Duke Street. His passion for Henley made this an easy decision!

After immersing himself in clinic life for several years at Back In Line, Laurence took a break and started a plan to develop his own local business and later clinic. He partnered with Rob Griffiths from Athlete Service and after much hard graft they opened in the Oast House in the Greys Road Car Park.

Three years on Rob now has a flourishing sports shop and Laurence a booming clinic in the centre of Henley-on-Thames.

At the age of 30 Laurence can claim a strong understanding of many aspects of Henley life from family, school, sports, and business. Starting a local business in Henley has allowed him to gain a real understanding of the town and the issues retailers and business face. Laurence would love the opportunity to help the Town Council both build on what they have and create new and exciting strategies to tackle the challenges the town faces. 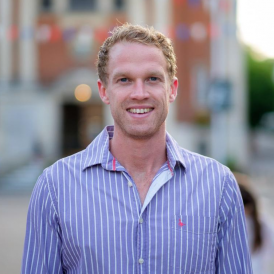